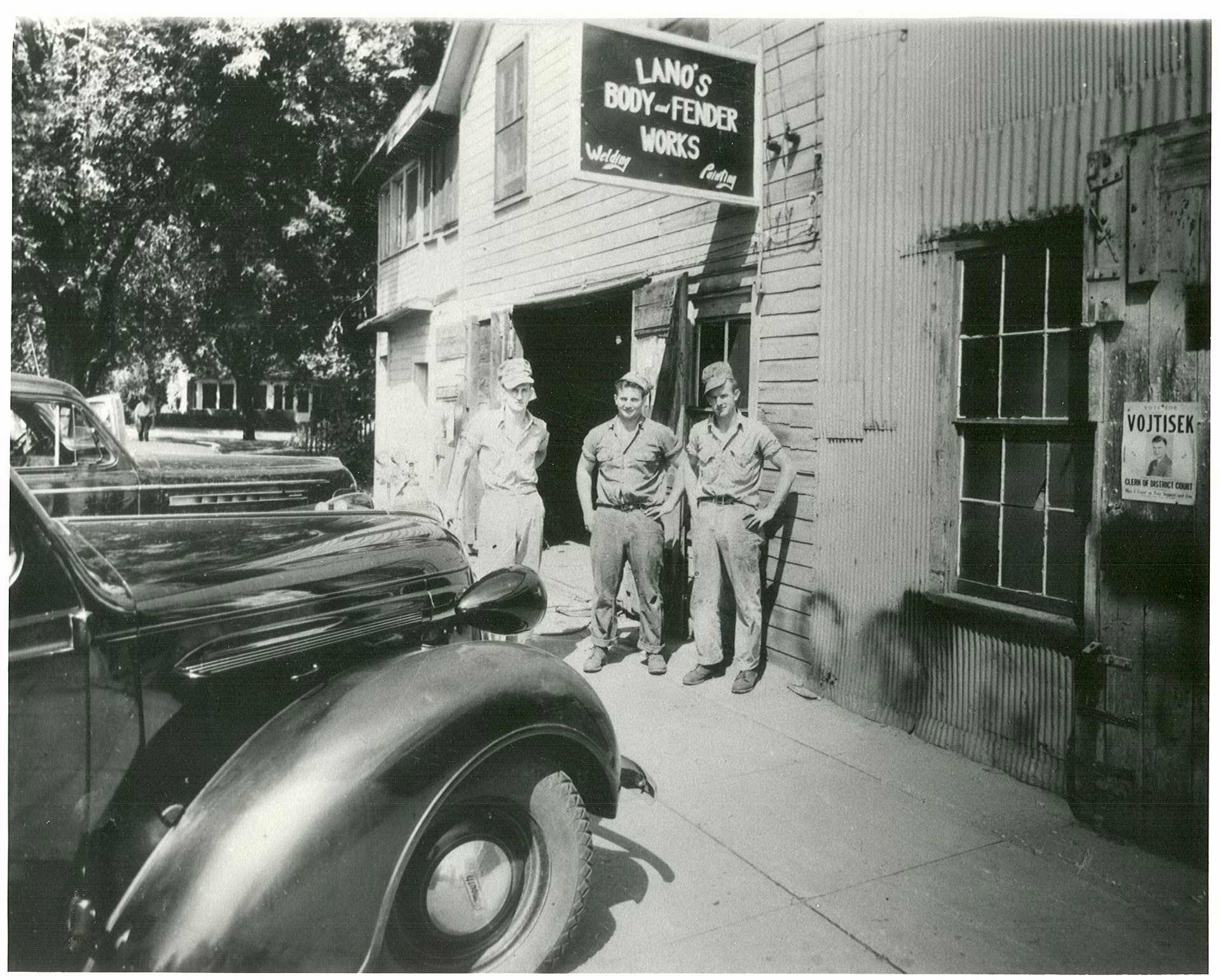 Shakopee, MN — 2021 marks the 75th Anniversary in business for Lano Equipment, one of the Twin Cities’ largest and most successful power equipment dealers. Considered the world’s oldest Bobcat dealer, Lano Equipment also competes nationwide with a number of brands, while serving Minnesota with stores in Shakopee, Loretto and Anoka.

Like many great American success stories, the Lano legacy takes many unexpected twists and turns over seven decades. The dream began in the minds of four very hard-working brothers who grew up on a farm near Chaska, MN, and later joined the military to serve in WWII. In 1946, the four returned home with aspirations of starting a small business. Today, the story continues as second and third generation Lanos break sales records.

When the four Lano brothers mused about starting a business, they had no idea they would defy the odds of business longevity anywhere in America. To put it in perspective, the U.S. Census Bureau reports that only about 12% of U.S. companies today are older than 26 years. The prevailing theory, though unconfirmed, is that only about a half of one percent (0.5%) of all U.S. companies have lasted 100 years.

With thoughts of wartime safely in the past the spring of 1946, Joe, Clarence, Dick and Gerhard (Hauser) Lano cobbled together $1,400 to purchase a building in Chaska, MN, not far from their Father’s farm. They opened Lano’s Body and Fender Works, an auto repair shop to serve local customers. The building wasn’t in great shape. One could almost see through the walls. After only three months in business, with Fall approaching, the brothers urgently contemplated expansion into a heated building.

The brothers visited local banks in search of capital, $3,000 to be exact. The first banker they approached told them their father would have to co-sign for the loan. No dice, they said. With too much pride, the brothers declined and tried another bank. Carver County State Bank CEO, Dana Dutoit Sr. told the brothers, “why should I loan you young punks $3,000? What can you do with $3,000? I will give you $5,000, then you will have something”

The banker was right. As history will attest, the Lano Brothers had a vision that would endure for over seven decades.

With fresh capital, the brothers built a new facility for Lano’s Body and Fender Works in the Fall of 1946 in Chaska. Not satisfied with just repairing cars, the ambitious brothers sold the new Kaiser-Frazier automobile line. Unfortunately, the car maker collapsed after a few years, so the Lano Brothers needed a new business plan.

With the car business now gone, it was time to shift gears. The brothers astutely recognized that Chaska’s predominantly rural agricultural market needed farm equipment, and lots of it. In 1949, they purchased an Allis Chalmers dealership and then added both Minneapolis Moline and New Holland hay equipment. With a firm foothold in the agricultural business, they renamed the company Lano Brothers Implement.

By 1954, brother Clarence had other ambitions, and left the business in search of new opportunities. The partnership was now just three brothers.

In the late 1950s, Melroe Manufacturing of Gwinner, ND was dabbling with a clever new invention — a lightweight, agile, four-wheeled contraption they claimed would be ‘ideal for cleaning out barns.’ The curious contraption turned out to be what we know today as the ‘Bobcat’ Skid Steer Loader. When Melroe introduced it at the MInnesota State Fair, it caught the eye of Hauser Lano.

“I remember my Dad, Hauser Lano telling me it was ‘love at first sight,’” said Gary Lano, second generation president of Lano Equipment. “The Lano brothers became a Bobcat dealer that same day in 1959.”

As one of the first Bobcat dealers anywhere, this versatile new loader would become the foundation of Lano’s fast-growing equipment business. Currently, Lano Equipment is considered the world’s oldest Bobcat Dealership, having sold and serviced thousands of these popular machines that are used in construction, landscaping, maintenance, agriculture and more. Not just a tool for ‘cleaning out barns,’ as it turns out.

Over the years, Melroe worked very closely with Lano Equipment, helping them become the top Bobcat dealer in ihe country by the 1970s. Year after year, Lano Equipment receives awards from the manufacturer for sales, service, and community support. Most of the first and generation Lanos have served on many different dealer councils.

In 1960, the Bailey Implement company in Norwood, MN was having financial trouble, thus another opportunity for the Lano brothers. Allis Chalmers offered the struggling dealership to the Lanos. They pounced. They purchased the dealership with brother Dick taking the helm for nearly 30 years, successfully serving the Norwood rural market. By the late 1980s, Dick was set to retire, and opted to sell out to Hauser and Joe, taking the Norwood dealership in return for his partnership share. It was a clean split, as DIck quickly and amicably sold the Norwood store to his sons Jack, Bill, Paul, Andy and Bob. The business operates today as Lano Equipment of Norwood.

The remaining partners, Joe and Hauser still had their hands full with the business in Chaska. By 1978, after decades of success selling Bobcat Loaders and other farm implements, Lano Brothers Implement had outgrown their Chaska facility. They built a shiny new 16,000 sq. ft. facility on six acres of land in nearby Shakopee, MN. Lano Brothers Implement also incorporated, changing its name to the present, Lano Equipment. Inc., and naming Gerhard (Hauser) Lano as President, Dick as Vice President (prior to retirement). and Joe as Treasurer. With farm equipment mergers, Lano Equipment. Inc. now represented more new product lines including Deutz-Allis, White Farm Equipment, and Ford New Holland.

In the 1970’s, some 30,000 Farm Dealers served the United States’ booming agricultural market. By 1986, small family farms were a dying breed, and this number of dealers declined to 6,000. The changing environment forced Lano Equipment to make changes. They continued servicing the farm industry with parts and service, but expanded into industrial and construction markets, adding JCB and Felling Trailers while dropping Deutz-Allis, White Farm Equipment and Ford New Holland.

In 1991, with a booming economy, and recognizing the demand for an industrial dealer in the north metro, Lano Equipment, Inc. leased a 3,000 sq. ft. building in Anoka, MN. Eight short years later they outgrew it, and purchased a 16,000 sq. ft. building just a half-block away. One of the first orders of business with the Anoka expansion was to add the Kubota product line to help them reach the growing compact tractor market. Kubota later expanded its product line with excavators, track loaders and now skid steer loaders.

“Being a retailer for two world-leading manufacturers, Bobcat and Kubota, sure makes our life a lot easier,” said Kurt Lano, vice president. “These two brands cover so many different needs, it opens up so many opportunities for us.”

Years passed and the founding Lano brothers’ children began working in the stores. it was inevitable that some would help shape the company as they matured.

Joe’s sons, Joe Jr., Roger, and Kurt, are all active in the company: Roger is treasurer, Kurt is vice president, and Joe Jr. was secretary until his retirement this year. Joe Lano Sr. passed in December of 1996.

Clarence Lano, one of the founders, is retired and living in Texas, at the time of this article. At the 70th Anniversary of Lano Equipment Inc., the second generation consists of Gary Lano, president; Kurt Lano, vice president; Joe Lano Jr., secretary; and Roger Lano, treasurer.

Today, a third generation is taking shape. Juston and Evan Lano, sons of Roger Lano, are active in sales. Kurt’s two sons, Nick and David Lano work in shipping and service. Gary Lano has a daughter named Mercedes, who at age 12 said she would like to work for Lano Equipment Monday through Friday, and professionally dance ballet on the weekends. Time will tell.

With this young, hungry group of people mentored by wise veterans, Lano Equipment should be around for decades to come, Gary Lano said. He added that even though he didn’t initially envision himself working for his father and uncles when he was a younger man, the experience of getting up and coming to work offers a new reward each day.

“I think I can speak for my business partners when I say that we all enjoy coming to work and interacting with our employees,” Gary reflected. “And with our customers, well, they’ve become life-long friends.

Iin 2021, Lano Equipment, Inc. had a record sales year, after steady sales increases for the past decade. Lano has also grown from roughly 50 employees in 2014 to nearly 100 in its three locations. Recognizing the internet as the ‘future of our business,’ in 2013, Gary Lano made the wise decision to invest thoughtfully in a full-featured internet presence that is still evolving today at LanoEquip.com. The website, also aided by aggressive advertising platforms, reaches customers all over the country helping them sell attachments, trailers, and all kinds of equipment in markets well beyond MInnesota.

“We will continue to grow most likely, and the internet will be a big part of our growth,’ Gary predicts. “This is how people research products and shop these days, and that’s not going to change anytime soon. You can bet if you’re searching for a Skid Steer Loader or an attachment, you’ll see our website pop up on the first page.”