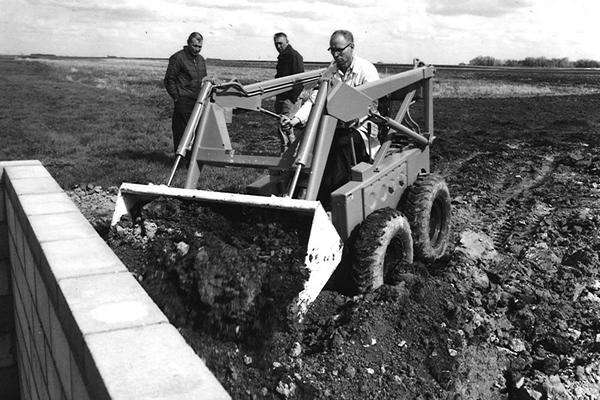 Cyril and Louis Keller, the brothers who invented the world’s first compact loader (later named the Bobcat skid-steer loader), have been selected as 2023 inductees for the National Inventors Hall of Fame (NIHF). The NIHF annually recognizes inventors, promotes creativity and advances the spirit of innovation and entrepreneurship.

In the 1950s, brothers Cyril (April 8, 1922-Oct. 28, 2020) and Louis (May 9, 1923-July 11, 2010) operated a small machinist-blacksmith shop in Minnesota together, building and repairing machinery for local farmers. A farmer approached them with a need for a self-propelled loader light enough to be lifted to the second floor of a turkey barn and small enough to clean around the barn’s upright poles. In 1957, the Kellers built a three-wheeled loader with two drive wheels in front and a caster wheel in the rear – the precursor to the modern skid-steer loader. The loader came to the attention of Melroe Manufacturing Company (now Bobcat Company), which invited the Kellers to demonstrate their invention in their booth at the Minnesota State Fair in 1958.

“We are proud of our inventors’ spirit of innovation, and while we remain grounded in our humble roots, we continue to push the boundaries to offer customers increased choice, improved performance and advanced technology to work smarter.”

After a successful demonstration at the fair, the Melroe Manufacturing Company was awarded exclusive manufacturing rights to the machine on a royalty basis and hired the Keller brothers to refine the design and put the machine into production.

To improve on the design of the loader, a second set of drive wheels was added to the back of the loader in 1960. With this four-wheel drive, the M400 became the world’s first true skid-steer loader. “Skid-steer” describes the unique steering system, which enables the machine to turn within its own length. Later, the Bobcat brand name was established because of the machine’s toughness, quickness and agility. As Bobcat Company celebrates 65 years since the invention of the machine that created the compact equipment industry, it has continued to forge the future of the industry through innovation and forward-thinking.